The opposition (Vote No!) spoke first. Kate Miller, advocacy director and primary lobbyist for ACLU Kentucky, was the starting quarterback with loads of statistics on how many poor women there are in Kentucky and the tremendous burden SB9 would be. She promised the unconstitutional bill would be held up in litigation for years like the other pro-life bills the Kentucky Legislature has passed.

Most people know that the pride and joy of poor people is their children. And what about adoption? It is true, though, that the ACLU knows how to jam the court system with lawsuits to convince Kentuckians that they are ignorant of the laws on abortion. (But a lot of pro-life progress has been made over the years!)

We also heard testimonies from a Planned Parenthood rep, an ObGyn doctor, a pastor of a Christian church who sees SB9 as injustice, a mother who lost a child from a fetal anomaly (did not require abortion), and an entrepreneur who could not have grown her business if SB9 had been in effect. She also said Kentucky already has way too many restrictions, forcing her to go out of state to have an abortion.

The testimonies of those who want to see SB9 pass (Vote Yes!) began with a physician with good insights on pre-born humans. We heard from a BesideUforLife center representative who is an ObGyn physician, an abortion survivor whose twin had been successfully aborted, and who had a daughter of her own. She wanted to know where was the justice and concern for her and for her daughter who would not exist except for the failed abortion. A pregnant mom was “miked” so we could hear a heartbeat. The Bill passed out of committee 10-2 and in the Senate 31-6. See KRLA Current News for more info. 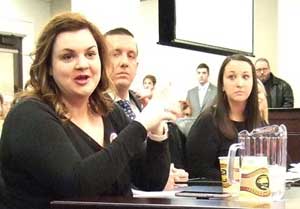 By far the most forceful testimony came from Abby Johnson, a national speaker who once was employed with PP and knows first-hand what their tactics and practices are. Abby boldly reminded the opposition that they can find better work and renew their minds to think normally about life. Seated next to Abby is Sen. Matt Caslen who sponsored SB9. Next to him is Claire Culwell of Austin, Texas, whose twin was aborted.

ASIDE: Abby was the featured speaker at the Louisville RTL 2013 Celebration of Life Banquet! These banquets are always so special. Please come this year! More info.