With the ‘draft’ version of the SCOTUS decision on Roe v. Wade leaked on Politico, we are thinking through the potential ramifications. Will Kentucky’s ‘Trigger Law’, established in 2019 through HB148, be set off in the very near future to ban all abortions? WHOA! We do not yet know whether the Roe ‘draft’ ruling will be the final one.

The Abortion issue has become knotty, and the KY laws regulating it reflect a circuitous landscape. In fact, the many Amicus briefs submitted to urge the high court to reverse Roe in the Dobbs case, cite hundreds of cases that conflict because of varying interpretations of Roe in state and federal courts.

The section of the Kentucky Revised Statutes that was revised to include HB148 states that KY will ban all abortions, medical and surgical, should Roe v Wade be reversed, or should another constitutional amendment be passed. If this occurs, we will say, “It’s Springtime in the Commonwealth!”

This triggering effect ideally would eliminate the need for the current HB3 regulations. However, there was a stipulation in the 2019 law that its ban of abortions would be effective “relative to the appropriation of Medicaid funds.” If the President should issue an executive order or the Congress pass a statute that would require a state to fund abortion in “limited circumstances” to remain eligible to receive federal Medicaid funds, then the bullet would be deflected in some instances, to the best of our understanding.

We cannot know what the new landscape will look like, especially at the rate the Biden administration issues new orders. We do know that adding the Yes-for-Life Amendment to Kentucky’s Constitution will be needed. It states: To protect human life, nothing in this Constitution shall be construed to secure or protect a right to abortion or require the funding of abortion. This amendment PREVENTS a misinterpretation of existing law, as the Roe decision effected in the US Constitution. Please keep this in mind when you go to the polls in the fall and help spread the word!

Meanwhile, our pro-life Attorney General Cameron is defending HB3, and the Monday, May 2, hearing ended in Judge Jenning’s statement that she would issue a ruling of a partial injunction very soon. Both sides agreed that certain of the Humanity in Healthcare Act’s stipulations can be immediately enforced.

Following the Judge’s Order, both sides agreed to extend the amount of time for answers or responsive pleadings. The State will have until June 2nd to file an answer and the Plaintiffs— Planned Parenthood, EMW and the ACLU, will then have until June 23rd to respond. 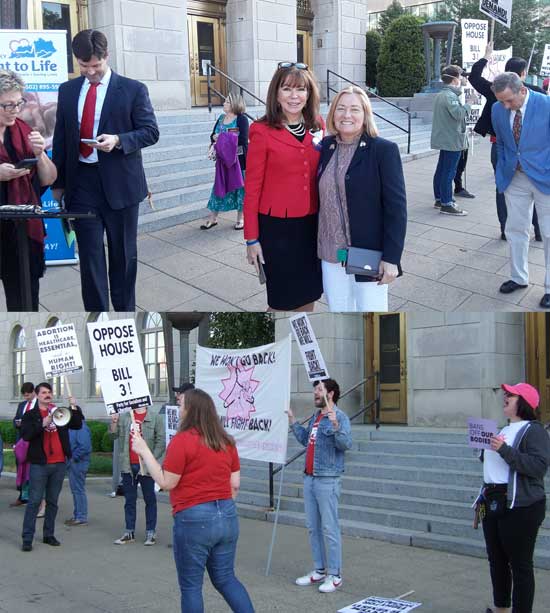 As you can note from the photos, opposition to HB3 was vociferous with a powerful bullhorn, but our pro-life supporters brought a peaceful witness for Life. I am so proud of all pro-lifers for your steady, loving, persistent, effective work to put an end to Roe v Wade and abortion. I am very close to saying, “Congratulations, you have won!” But we await the orderly application of American law.

Watch the video of the news conference that followed the court hearing here.