Please join us at the Capitol on Monday, March 29, at 10:30 AM for a brief rally to encourage the Ky Senate to pass HB 91. This bill is Kentucky’s ProLife Constitutional Amendment which has already passed the House, and the Governor cannot veto it. 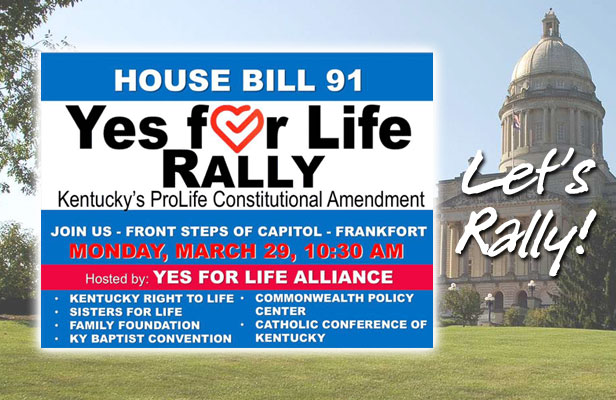 In numerous states (see important to know), abortion advocates have sued to overturn pro-life laws, and their respective Supreme Courts have “found” a right to abortion in their state constitution. This technique is how Roe v. Wade became our nation’s case law.

A number of states have passed constitutional amendments to protect their pro-life laws from such court decisions. (example)

Rep. Joe Fischer testified during a Senate committee hearing that HB 91 assures, “No Ky court will be able to fashion an implicit right to abortion from the language in our state constitution: there will be no Roe v. Wade decision in Ky. The regulation or elimination of abortion will be vested in the Ky General Assembly, not in the courts.” (Read more.) HB 91 ensures that it is the lawmakers of Ky who make the laws, not rogue judges.