The KRLA PAC ALERT Voter Guide has only three recommendations on judges. A short bench! It can be hard to discover whether or not a judge is pro-life.

A judge must run as a non-partisan, so unless we hear from a person who knows them or knows someone who does, or the candidate makes it clear, we cannot know their views on the sanctity of life. Likewise, KRLA cannot endorse any judge due to the non-partisan nature of the race. We only recommend when we have trusted information. Let us know when you have a tip! We will verify your information.

All judges’ positions in Ky are elected offices, but if a judge departs a seat before the end of the term, the new U.S. District or Appeals Court judges will be appointed by the U.S. president, and the Ky Supreme Court, Court of Appeals, Circuit Court, Family Court or District Court vacancies will be filled by appointment of the governor. Their nominations or appointments are based on lists received from the judicial nominating commissions.

Ky has an Eastern and Western district plus a temporary judge who can serve if a sitting judge becomes disabled. There are seven Supreme Court and Court of Appeals districts, 57 circuit court districts and 60 Judicial districts. The graphic shows the seven districts of Ky’s Supreme and Appeals Courts. 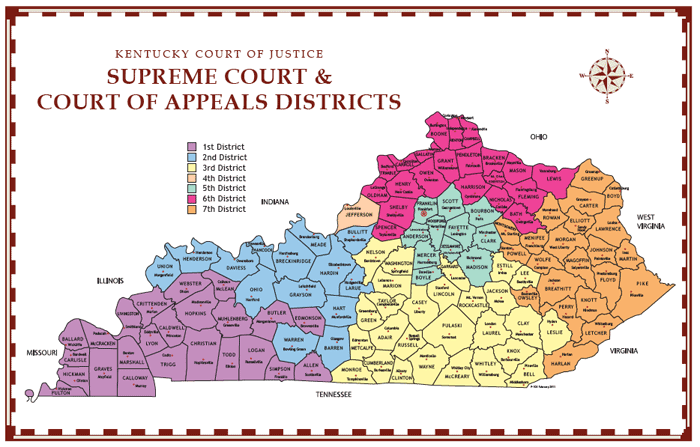 The candidates recommended in the PAC ALERT include:

Robert Conley’s opponent, Rep. Chris Harris (D-93), is stepping down from the Ky House to run for the Supreme Court position, recruited by Gov. Beshear. Jenny Hines’ opponent, Chris McNeill, was appointed to the seat by Gov. Beshear earlier this year.

The Ballotpedia states that Whitaker’s opponent, Walt Maguire, was a family court judge for the 28th Circuit who retired on June 30, 2013. The Somerset, Ky online newspaper reports: A local retired judge is seeking an opportunity to return to the bench… Maguire acknowledged… “I’m not signing on for eight years, but I just like being involved in trying to make a difference in our communities in a positive, constructive, traditional way.” So, voting for Maguire is voting for the person who will succeed him by appointment.

Judges make so many important decisions; holding a high view of human life is essential to their role in society.

Ky has rarely had a helpful verdict in the Western District Court that hears the legal cases relating to the pro-life laws passed by our Legislature. An interesting article on the judicial role in deciding the “times, places and protocols” for congressional elections is here.

How will you mark your ballot?