The VETO Days of the 2022 Regular Session began March 31. Gov. Beshear vetoed HB3 on Friday, April 8. The Courier-Journal reported, "Beshear, in vetoing HB 3, listed what he said are multiple flaws, leading with the fact the bill makes no exemption for those who become pregnant by rape or incest, while at the same time making it harder for girls under 18 to end a pregnancy without notification to both parents." Stay tuned.

Good news for ProLife Kentuckians — House Bill 3, the Humanity In Healthcare Act 2022, has passed the Kentucky House! Now on to the Senate.

On behalf of Kentucky Right to Life and our Chapters across the Commonwealth, our sincere thanks to Rep. Nancy Tate, District 27, for her skill in sponsoring this bill, and to the members of the House ProLife Caucus for their support and votes, and to David Osborne, House Speaker pro tempore, for making the right to life and HB3 a Session priority.

Thank you to all our Yes-for-Life-Kentucky and KRTL members and friends for their presence and support at our March first Rally.

At the Rally, Ky Secretary of State Michael Adams announced that our ProLife Constitutional Amendment is officially slated to be on the General Election ballot as measure #2, on Tuesday, November 8!

Thank you to all the ProLife champions who spoke at our rally, our State Officers and Legislators, and to each of you who helped to make our Kentucky Right to Life/Yes-for-Life Rally Day spectacular! See the video and slideshow. 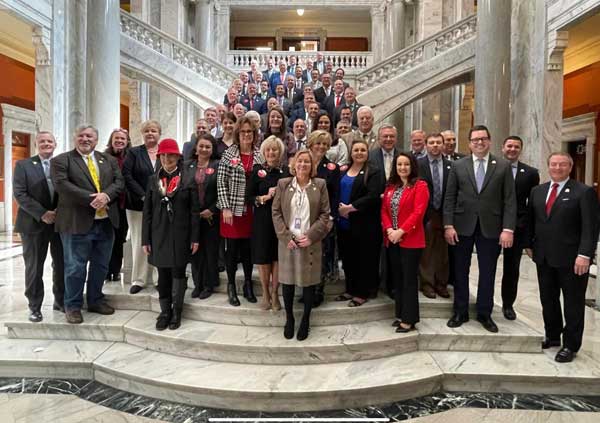 Click image to view larger and use back button to return to article.