The U.S. Supreme Court has granted the Trump administration’s request for the reinstatement of the FDA rules requiring an in-person doctor visit before a woman obtains abortion pills.

LifeNews stated: The dangers of de-regulating the abortion drugs are serious, and the consequences are being seen in England. In March, the British government temporarily allowed the abortion drugs to be mail-ordered during the pandemic. By July, reports began to surface of women dying after taking the drugs.

NRLC’s Carol Tobias said: “We are pleased that the U.S. Supreme Court recognizes the serious nature of chemical abortions and the need for the FDA to have protocols in place to protect women from potentially life-threatening and devastating side effects…”

LifeSiteNews predicted: The SCOTUS ruling is premised on the federal government having the power to decide FDA regulations… it is all but certain that Joe Biden and Kamala Harris will suspend or permanently scrap the basic health and safety regulation soon after taking power.

With the October 8 decision by the Supreme Court to allow abortion pills to be sold by mail AGAINST FDA REGULATIONS, there are sure to be many home abortions until the matter is fully decided. Justices Clarence Thomas and Samuel Alito dissented.

The district court judge who ruled that the pandemic makes it necessary for women (nationwide) to get pills without seeing a doctor in person has been advised by SCOTUS to “review his ruling and issue a new order within 40 days.” The case will then be revisited, and as stated on the SCOTUS blog, by the time … the proceedings return to the Supreme Court, the court may have welcomed a ninth member.

The SCOTUS blog further noted that “Thursday’s order may well reflect a compromise in the wake of the Sept. 18 death of Justice Ruth Bader Ginsburg, which left the court with only eight members.” This makes it sound like RBG’s death was honored by letting women handle their own abortions, a pathetic footnote in the annals of abortion lore.

As reported in the recently published 2019 abortion statistics, of 3,664 abortions performed in Ky, 3,249 were done when the pre-born baby was from 1-10 weeks gestation. 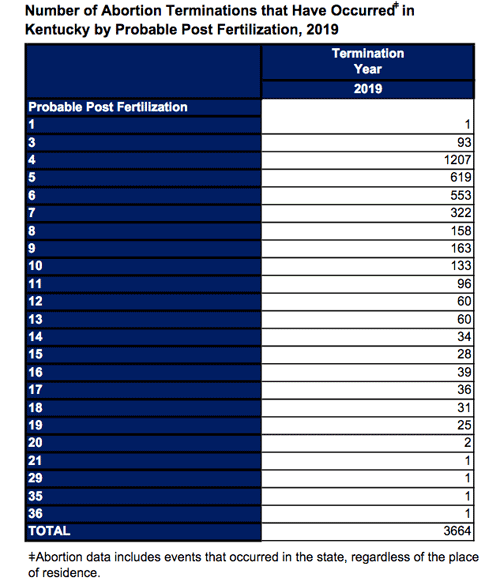 Note, the FDA rules require that the abortion pill be provided in-person by a medical professional to a woman UP TO 10 WEEKS of pregnancy. So, why does PP stretch it to 11 weeks?

Medical abortion not a new trend

It seems likely that many of Ky’s abortions are already done at home. But at least up to last week, the woman was required to see a physician in a clinic for evaluation and some emergency assistance. And, by law, the doctor was required to tell the patient about the Abortion Reversal Pill. That law passed in Ky in 2019. Some ladies have reported that they were never told about it. We doubt that the advisory will be included with the abortion pills received by mail.

For a time, and perhaps from now on, abortion is a DIY, do-it-yourself procedure.

How can we spread the GOOD word that a medical abortion can be reversed?

Know the facts! When you have the opportunity to share information, be sure your friends and acquaintances learn that if a woman changes her mind after taking the abortion pill, she can go online to AbortionPillReversal.com. She should call the Emergency Phone, 877.558.0333.

Currently, this service can recommend one pregnancy center and three physicians in Kentucky who are in the Abortion Pill Rescue Network and able to prescribe progesterone to a client wishing to reverse an abortion.

This is a safe procedure. See more information here.