Our new logo announces a focused mission— Watch for more news and changes. 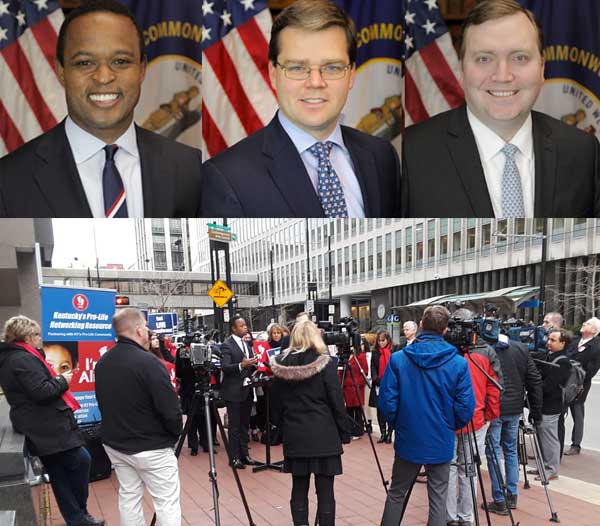 Attorney Kuhn explained to the panel of judges why the trial to defend the Law (in November 2018) against the EMW/ACLU challenge was improperly decided. Numerous legal precedents were cited. Many who are reading this article would find the audio of the hearing very interesting. It is accessible on the Appellate Court website here.

The courtroom was packed, with nearly all the seats taken by pro-lifers. The judges were Gilbert Merritt, appointed by President Jimmy Carter; John Bush, who also served on the hearing for the Ultrasound Law (a pro-life victory!), appointed by President Donald Trump; and Eric Clay, a Bill Clinton appointee. The timeframe for their decision is unknown at this time.

Following the hearing, a media conference organized by former Rep. Addia Wuchner was held just outside the Courthouse. She championed the Dismemberment Law during her final term in the House after representing District 66 since 2005. Ms. Wuchner now heads ProLife Woman, a Women’s Health Advocacy Media Group.

AG Daniel Cameron, Sen. Whitney Westerfield and Attorney Kuhn addressed the media and answered questions. AG Cameron assured the crowd that Kentucky would pursue the case to the Supreme Court if needed. Reference was made to a procedure during which a baby’s beating heart was expelled during the D&E abortion. He pointed out that the people of Kentucky would not permit this gruesome and inhumane medical procedure to be practiced on an animal. Why do we accept it for the human infant?

All the speakers agreed that Dismemberment Abortion is a sad reality but if it must be offered as part of the Roe v. Wade legal rules, then assuring the painless demise of the fetus before its limbs are torn off and its head is crushed— is essential.

AN ASIDE: The arguments insisting that it is the safest way for the woman never take the child into consideration. This hearing was timely in that scientists have recently confirmed that a fetus feels pain as early as 12 weeks.

EMW was represented by Atty. Andrew Beck, who is listed as an employee of the American Civil Liberties Union Foundation which is located in New York City. No supporters of Dismemberment Abortion were in view when the media interviewed him.

For more photos, visit KRLA’s Facebook page. For background on this topic, see all previous Forum posts and the Laws Under Fire webpage.