Attorney General Cameron vowed from day one to defend the laws of our Commonwealth and he has not wavered in his promise. Over a year ago we stood on the steps of the US 6th Circuit Court of Appeals in Cincinnati, Ohio, where he pledged his commitment — to defend, if necessary, HB 454 -The 2018 Human Rights of the Child Act banning live dismemberment abortions, all the way to the US Supreme Court. Today he kept that promise. 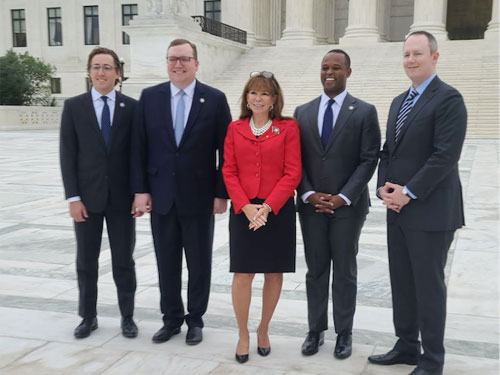 As Kentucky Right to Life Executive Director, it was an honor to stand at the Supreme Court of the United States representing ProLife Kentuckians in support and prayer for General Cameron, Deputy Solicitor Matt Kuhn, and the entire legal team as they defended the “right to intervene” on behalf of Kentucky’s ProLife law that passed by an overwhelming majority of the Members in 2018. I am very proud of my former colleagues, especially the 106 of 138 members who courageously voted to end this particularly gruesome form of abortion that brutally extinguishers the life of an unborn child.

You can read the transcript of the Argument here and listen to the audio here.