Not long ago Kentuckians stood firmly against Early Voting, Mail-in Voting and other unconstitutional methods. But in the midst of COVID regulations, we have accepted these practices.

Ky’s mail-in “absentee” ballots must be requested, and this is safer than simply mailing ballots to all registered voters as some states do. Our Secretary of State (SOS) Michael Adams also requires that mail-in ballots be properly completed and that signatures match those on file with the state (for drivers license, etc). Nevertheless, many say that early and mail-in voting are detrimental to elections.

On July 28 our SOS reported to an Interim Joint Committee on State Government, televised on KET. He answered questions and heard comments about early voting and more. He stated that up to this year, Ky's elections cost about $8-10 million, and that it is not affordable to require absentee ballots for all Kentuckians. Ky has 3.4+ million registered voters and many will request to vote in the November. Return postage must be provided to avoid law suits. About two-thirds of Ky’s annual budget for 2020 elections was spent for the Primary. More money is needed. 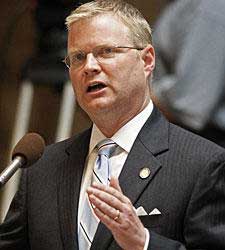 Sen. Damon Thayer (R-17-Grant, Kenton (Part), Scott) spoke up and thanked the members present who had voted for the bill which passed during the General Assembly that required any changes to the election process to have the agreement of both the SOS and the Governor. He noted that Gov. Beshear vetoed that bill, proving he wanted to control the election process. The legislators overrode his veto so that the SOS has input to the process (hence, the committee hearing).

I appreciate the system you came up with for the Primary Election … But voting three weeks in advance is not something we should do on a regular basis.

Everyone in this room has run elections; the information shared with the voters is meant to peak on election day.

Had June 23 been a regular election, then Representative Charles Booker would be the democratic nominee for U.S. Senate today.

It was clear that the only reason Amy McGrath won the nomination was that there were huge numbers of absentee ballots cast for her before people even knew who Representative Charles Booker was. (Ed: the final vote count between McGrath and Booker was 247,037 to 231,888.)

Early voting shows no favor to underfunded or less well-known candidates, and I thought the Booker-McGrath race backed up my point, so I hope we’re not voting for three weeks before the election (as in the Primary) …

I’m glad to hear we will have more polling locations than in June … I voted in person and I will vote in person on November third … I understand we have to have a somewhat different situation than normal, but I hope it’s different than what we had in June.

Others in the meeting expressed support for Early Voting and Mail-in Voting. To hear the entire broadcast, go here. Express your views to your legislators!

COVID has been credited for the significant changes and huge additional expense for elections in Ky., but on Aug. 26 the CDC reported: “The vast majority of Americans officially recorded as dying from COVID-19 also had other factors contributing to their deaths… For 6% of the deaths, COVID-19 was the only cause mentioned… For deaths with conditions or causes in addition to COVID-19, on average, there were 2.6 additional conditions or causes per death, such as pneumonia, respiratory failure, diabetes, or heart disease.” This news was reported on many internet sites and needs to be broadly shared even though it is too late to affect the November election.

Let’s all vote pro-life, and drain the swamp, not the Treasury!