A press conference was held Thursday, January 10 at 12:30 pm in the Capitol Rotunda by the Kentucky Legislature Pro-Life Caucus. Pro-life bills for the 2019 Session were announced.

The Pro-Life Caucus is a large group of legislators who are committed to defending innocent life and pursuing policies and legislation against abortion. It was officially recognized on Jan. 22, 2018, the 45th anniversary of Roe v. Wade, but not before that because until 2017 the House was controlled by a pro-abortion majority.

Before the press conference, many in the audience were overheard saying— “Wow! I can’t believe we have all these pro-life people in our legislature!” “This is so encouraging!” “This is incredible to see such support. It’s wonderful!”

Gov. Bevin attended for a time. It was a busy day for him— he would later announce he will seek re-election for Governor this year. He was recognized by Caucus leaders for his active support and received a lengthy and loud round of applause.

Caucus chairman Tim Moore praised those who had promoted pro-life legislation during the long years when their bills could never even get out of the committees that were all controlled by democrats. KRLA’s Margie Montgomery travelled to Frankfort nearly daily during each session over the dozen years when no bills were passed. 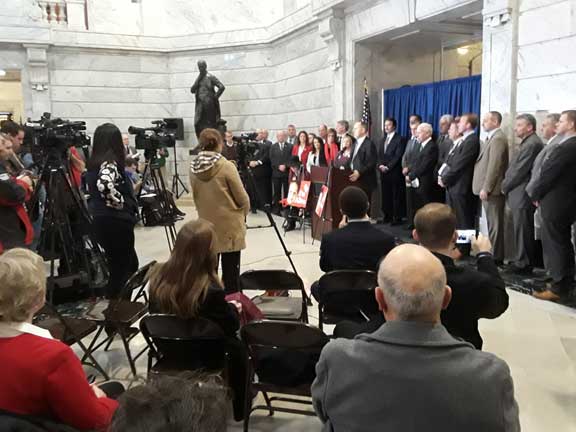