Pro-Life America is Winning the Abortion War on this 46th Anniversary of Roe v. Wade 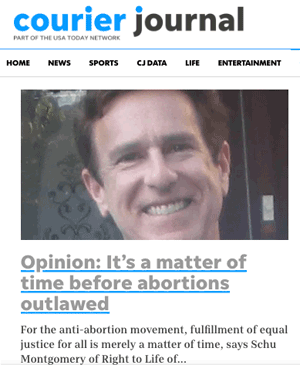 The hundreds of thousands of dedicated pro-life citizens braving blizzards and sub-zero temperatures at the annual March for Life in Washington, D.C. have much to be hopeful for. Their sacrifice, their tenacity, their prayers are paying off.

The pervasive presence of 4D ultrasound pictures of preborn children, the crescendo of crisis pregnancy centers outflanking abortion clinics more than 6 to 1, the surging number of abortionists’ (and their staff) quitting their deadly trade, sidewalk counselors peacefully witnessing weekly (if not daily) on the streets outside the killing centers, and the passing of many pieces of protective pro-life legislation, including the latest - to end discrimination of babies based on gender, race, or disability - are contributing to the eventual banishment of state-sanctioned slaughter of 60-million preborn children since the Roe v. Wade Supreme Court decision of January 22, 1973.

While there were 2,176 clinics doing surgical abortions in America in 1991, today there are 467 such facilities, a notable decrease of 79 percent! An imploding abortion industry struggles to remain solvent amid a falling demand for abortions. In 2016, there were 164 abortion facilities that conducted abortions at 20 weeks or later - 31 more than in 2018. This represents an impressive 19 percent reduction in the number of very-late-term abortion facilities over the past two years. In 2018 alone, 40 abortion clinics closed, some due to failure in complying with existing laws and safety regulations.

Not since Dred Scott in 1857 (declaring Blacks non-persons) has there been a high court ruling so destructive, so divisive, so unforgiving of God’s innocents’ and the sanctity of human life. As Justice Byron White, one of the two dissenters in Roe so aptly put it, the landmark case was an act of “raw judicial power.” It pitted mother against child, stripped states of the right to set their own abortion policies, and contradicted the very language and history of the Constitution.

Roe v. Wade and Doe v. Bolton (its lesser known companion case) said it was okay to tear apart, vacuum out, or poison a baby up to the point of birth for reasons of “health” so broad to include not only a woman’s physical. emotional, or psychological well-being, but her social health as well, and her age. Today, the vast majority of abortions are done because a woman feels pressure to abort from someone else, or because she simply doesn’t want or can’t afford a child (many couples, unable to have children of their own, would love to adopt).

The grassroots movement - to protect both mother and child, to love them both - has always been about righting a horrendous wrong. Women, too, suffer great pain - physically, mentally, and spiritually - and are Increasingly finding out that legalized abortion is not the panacea for unplanned pregnancy.

This is why lawmakers across the country have successfully passed “Women Right to Know” laws informing women of the risks and complications of both surgical and chemical abortions.

Women have the right to know that abortion can exacerbate a woman’s risk for breast cancer. A 2013 analysis by the Breast Cancer Prevention Institute confirms the correlation between abortion and breast cancer after reviewing some two dozen studies.

Moreover, a 2011 British Journal of Psychology meta-study on the mental-health effects of abortion on over 877,000 women shows increased rates of depression, anxiety, alcoholism, drug use, and suicide.

The shrugging off of actual studies demonstrating significant increases in premature birth or low-birth-weight babies in women who had prior abortions and the dismissiveness of reliable data showing that tele-med abortions - which don’t require a physician to administer the abortion drug, or even worse, examine the woman -do a grave disservice to women who deserve fully informed consent.

Given the realities above, plus a plethora of anecdotal evidence showing a steady rise in botched abortions - even death - underscore the need for new laws to protect women from unscrupulous abortion providers.

To cite just one example, the Preterm clinic in Cleveland, Ohio, has performed ten botched abortions since 2011, according to Abortion Stats 2018. That same clinic has been involved in numerous medical emergencies. Lakisha Wilson was 20 weeks pregnant when she hemorrhaged to death while undergoing an abortion at Preterm in 2014. Wilson is only one victim among hundreds who have died from legalized abortion.

Abortion’s lasting emotional scars have prompted many women to form “Silent No More” campaigns - to voice regret, and to help one another find light amid the darkness.

The Pro-Life movement, formed some fifty years ago to uphold the intrinsic value of all life, from the moment of fertilization to natural death, continues its mission to educate and eventually restore the inalienable right to life.

The undeniable truth remains - whether it’s a “he” or “she” - that our genetic make-up or DNA develops into a uniquely, unrepeatable member of the human family.

In a sound, civilized society the weak must be protected from the strong. Who, in our society, is more vulnerable than a preborn child?

Nineteenth century social activist Theodore Parker said it best: “The arc of the moral universe is long, but it bends towards justice.”

For pro-lifers, the fulfillment of equal justice for all — born and unborn — is merely a matter of time.

Schu Montgomery is on the board of directors of Right to Life of Louisville and is a teacher at Holy Angels Academy.