Are you a nurse or doctor who is increasingly concerned over the aggressive push to counsel or participate in unconscionable procedures or therapies?

Are you a pro-life citizen who believes healthcare practitioners should have conscience rights?

Sen. Stephen Meredith’s SB Bill 83 that we encourage you to support (See Legislative Alert), to assure conscience rights for medical care providers, was flagged for an amendment by Sen. Morgan McGarvey (D). Why?

He wants to broaden the class of people entitled to object on the basis of religious, moral, ethical, or philosophical beliefs or principles to include LRC staff, leadership staff, security personnel, doorkeepers, state park employees, and state troopers.

However, Sen. Whitney Westerfield has filed a friendly amendment to confine the language in the bill: The exercise of this right shall be limited to conscience-based objections to particular healthcare services.

Sen. McGarvey tried the same tactic last year until the bill finally became “a Christmas Tree” in the lingo of legislators, and died.

The American Association of ObGyns held a seminar on Feb. 27 to update members on the current environment for practitioners, and we attended.

Dr. Donna Harrison, an ObGyn and the executive director of AAPLOG, explained that the Equality Act which recently passed the House of Representatives, introduces new demands. If it passes the Senate, it will be signed into law. This will mean that Ky’s conscience rights legislation and other pro-life laws could face new and different court challenges.

The Equality Act uses the exact same terminology as the Final Rule of the Office of Civil Rights (OCR) regarding Nondiscrimination in Health Programs and Activities. The OCR in the Obama Administration determined what “discrimination on the basis of sex” means. It ruled that impermissible discrimination includes 1. gender identity, 2. sex stereotyping, and 3. termination of pregnancy.

So, under the Equality Act, refusal to terminate a pregnancy will be considered sex discrimination, a crime. An accusation by a patient will threaten loss of board certification and the job of an offending practitioner.

Every entity that receives federal funding MUST COMPLY, even the doctor who takes a medicaid patient. If a doctor or hospital or pharmacy does not comply, there is a private right of action: The patient who was turned away has the right to sue the entity or person.

“The stakes are very, very high for us as conscientious physicians,” stated Dr. Harrison. She presented information on the Hippocratic Oath, and explained that in a state-controlled utilitarian system:

Many other concerning facts were shared by AAPLOG board chair Dr. Christina Francis and others, and AAPLOG intends to stage four more conferences this year. We believe these will be well worth attending.

AAPLOG was begun in 1973 as a group within ACOG, the American College of ObGyns, as that college became radical abortion advocates. ACOG today “calls for advocacy to oppose and overturn restrictions, improve access and mainstream abortion as an integral component of women’s health care.” ACOG defines conscience as “personal sentiment.”

AAPLOG has presented the pro-life stand in all Supreme Court abortion cases. 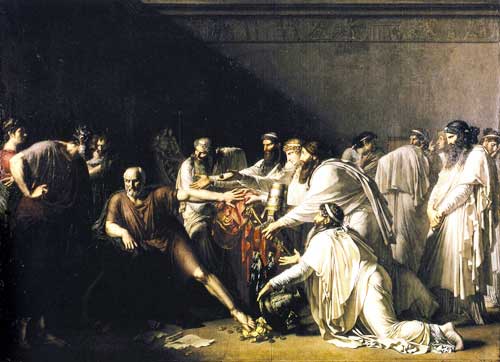 In the classic painting by Anne-Louis Girodet, Hippocrates is pushing away the gold and the scepter offered to him by Artaxerxes, insisting instead upon the practice of medicine as defined in the Oath. Its essential tenets are:

An implicit part of the Oath is the invocation of the transcendent blessing or curse, so that patients can assume their doctor will not harm them.

Today, many health care professionals are claiming the right to abandon their patients, particularly those who must make reproductive choices. A practitioner, Dr. Harrison noted, must decide: “Am I going to stand, or am I an agent of the state?”

The AAPLOG conference explained certain helpful legal defenses, its resources and publications, and described its goals and assistance to its 7,000 members. It is non-sectarian and offers evidence-based support for discussions with patients and colleagues. Why not share this article with your ObGyn?

Those who attended came away with a sense of urgency for societal norms that seem to be shifting from the Right of Conscience on which America was founded.

It's sad that we have so many calius people in a possion of athourity. What kind of morality were they taught in youth? Apparently not much and people keep voting them in!