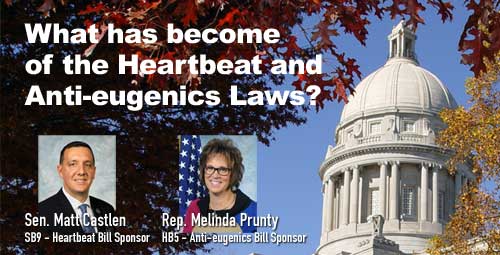 Second in a Series: Pro-life Laws Under Attack

The initial document filed March 14, 2019, by EMW’s attorneys states its case as a constitutional challenge to HB5, the Anti-eugenics Law. Then on March 15 the complaint was amended to include SB9, the Heartbeat Law, even before these had been signed into law by Gov. Bevin.

Both laws were viewed as unconstitutional by the Plaintiffs. The U.S. Constitution provides for a right to privacy in Amendment 14, and that is how Roe v. Wade was framed to permit abortion.

What does it mean to be a strict constitutionalist? On the surface, it sounds good, but the assault on the common values of the America that was once a Christian nation, has twisted our constitution so that now a judge can view the right to abortion as sacrosanct if it is performed prior to viability. And today the term Christian commonly includes pro-abortion church leaders and members.

The Heartbeat Law makes perfect sense to the pro-lifer who views the pre-born baby as a person with standing before the law. After all, in Kentucky we have laws to prosecute anyone who wantonly causes the death of an unborn child in a criminal manner. We recognize the fetus as a person.

But on the other hand, we uphold Roe v. Wade as the law of the land, and call abortion a woman’s right. We say it is constitutional based on the 14th amendment,
A person may choose to have an abortion until a fetus becomes viable, based on the right to privacy contained in the Due Process Clause of the Fourteenth Amendment. Viability means the ability to live outside the womb, which usually happens between 24 and 28 weeks after conception.

So it is that the Plaintiffs have argued that both HB5 and SB9 are unconstitutional.

They won a Temporary Restraining Order in part based on this reasoning and could win the case at the District level as well.

We think our attorneys’ reasoning is much better. We will look at that in the next post.

This week the Plaintiffs filed a new document referencing the Alabama law to ban abortion (nearly totally) that a federal district court has blocked, stating:
Alabama’s abortion ban contravenes clear Supreme Court precedent. It violates the right of an individual to privacy, to make "choices central to personal dignity and autonomy." Casey, 505 U.S. at 851 (opinion of the Court). It diminishes "the capacity of women to act in society, and to make reproductive decisions." Id. at 860. It defies the United States Constitution.

The concept of viability, as already noted, is currently defined as "the ability to live outside the womb, which usually happens between 24 and 28 weeks after conception." This definition has been disallowed by the Pain-capable rule that restricts abortion at 20 weeks of pregnancy when an unborn child can feel pain. Kentucky passed the Pain-capable Law in 2017.

As well, viability no longer is limited to 24 weeks; LifeNews reports on a baby born at 21 weeks, the youngest ever to survive, who is doing vey well now. The article states:
Research published in 2015 in the New England Journal of Medicine found that 23 percent of premature infants survive as early as 22 weeks of pregnancy, but some hospitals have policies against treating babies at this early age.

Many, if not most, pro-lifers and pro-life medical authorities believe that a fetus much younger than 20 weeks can feel pain. The legendary Silent Scream video of an ultrasound that shows an abortion of a 12-week fetus reveals the pre-born baby thrashing to avoid the abortionist’s instrument and a wide open mouth when she is struck.

The seamless process of fetal development is so wonderful and amazing. To think of its interruption for callous reasons or from ignorance is heart-breaking.

The construct of viability presumes the mother and child are at cross purposes. The infant must be able to fend for herself or himself to be worthy of protection against abortion. Yet, the "viable" child is hardly independent and neither is the mother. Both need lots of help.

This blog series will pick up after the November 5 General Election.