The 2020 Regular Session began January 7 and ends April 15. The last day a new bill can be introduced is March 2 in the House and in the Senate, March 3. See the Legislative Calendar here.

A number of bills have been introduced. To find out what your State senators and representatives will hear or debate during the session, go here and click on the Orders of the Day posted for the respective entities.

Following are bills that will interest pro-lifers:

➀ SB9 "Born-Alive Infant Protection Act" - Introduced by Sen. Whitney Westerfield— same bill as SB227 in 2019, is to “Create new sections of KRS Chapter 311 to prohibit a person from denying or depriving a born-alive infant of nourishment with the intent to cause or allow the death of the infant; …” This bill passed the Senate on Jan. 27.

At the EMW, Kentucky’s only abortion clinic, abortions are performed up to 22 weeks, and if a child were (miraculously) born alive it would need the resources of a hospital to survive. The bill is a strong statement that differentiates Kentucky from states such as New York whose laws permit leaving the born-alive baby to die. If abortions are being performed in any Kentucky hospitals, this bill would apply.

AN ASIDE: The “Pain-Capable” Kentucky Law that passed in 2017 states that a child can feel pain at 20 weeks post fertilization, but the statute defines the time frame in this way: “Pain-capable unborn child” means an unborn child of a probable post-fertilization age of twenty (20) weeks or more; The EMW took full advantage of the “or more” wording, and does abortions up to “21 weeks and 6 days”— or 22 weeks minus Sunday when it is closed.

➁ HB142 is “AN ACT prohibiting the payment of public agency funds to any entity that performs, induces, refers for, or counsels in favor of abortions.” Sponsored by Rep. Lynn Bechler and four other Republicans, it extends current legislation to prevent public funds from going to entities that refer or counsel in favor of abortion.

➂ HB67, sponsored by Rep. Joe Fischer and 36 other House Republicans, would create a new section of the Constitution of Kentucky stating that it does not secure or protect a right to abortion or funding of abortion. This would be accomplished by an amendment to our Constitution. The public would vote on this next November if it passes the legislature.

➃ SB90, sponsored by Sen. Stephen Meredith and four other Republicans, creates a new section of KRS Chapter 344 to protect the conscience rights of medical providers.

➄ HB370, sponsored by Rep. Nancy Tate and four other Republicans. The statute would become part of the Ky. Revised Statutes (311.710 - 311.830). This bill requires that “Within 24 hours after a spontaneous miscarriage or an abortion, the hospital or abortion facility shall (a) Disclose to the parent or parents of the fetus, both orally and in writing, the parents' right to determine the final disposition of the fetal remains; and (b) Provide the parent or parents of the fetus with written information concerning the available options for disposition of the fetal remains… (more).” We will link to this Bill when it is posted.

➅ HB391, sponsored by Rep. Stan Lee and three other Republicans. Amends KRS 213.101, relating to abortion reporting requirements, to allow the Auditor of Public Accounts to perform an annual audit.

➈ HB451, sponsored by Rep. Stan Lee and other House Republicans, would give the Attorney General more power to investigate and punish violations of state laws governing abortion clinics. These have been violated so they are being restated.

As we become aware of pro-life bills, we will update this post. You can watch the legislative proceedings on KET TV. 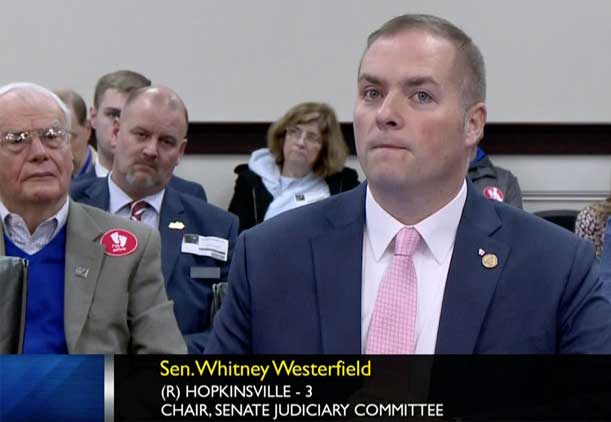