Such a loss for babies | Autumn 2019 LifeLetter


Well, it’s a hard pill to swallow. To lose our pro-life governor is ghastly, unbelievable, and sickening. I know we are grateful for the many pro-life bills Governor Matt Bevin signed into law during his time in office. His commitment towards protecting moms and their preborn babies was articulated frequently and was clearly sincere. To us, so active in Right to Life on a daily basis, the shock of envisioning a pro-abortion governor now at the helm is almost impossible to tolerate. But we are grateful for those on our ballots that prevailed and strongly reflected our firm pro-life beliefs. We are grateful for those who came to the polls expressing their commitment to the sanctity of human life! God bless you and them for showing love for life and willingness to exercise their freedom to vote!

One cannot take Kentuckians for granted! We were so convinced that we live in a strongly pro-life state that we didn’t question Bevin would not be supported for another term. Yes, we read the “morning after” comments, listened to the news accounts from every angle, but never doubted our candidate would falter – and lose so badly. All of our other endorsed candidates seemed to coast to great victories. Were we blind-sided? Do we stay in the office too much and not travel around Malls, go to restaurants, visit with neighbors . . . ?

Let us stay together, dear friends. We shall yet prevail with His love and help. Let’s support those newly elected and start mobilizing for 2020 and beyond! 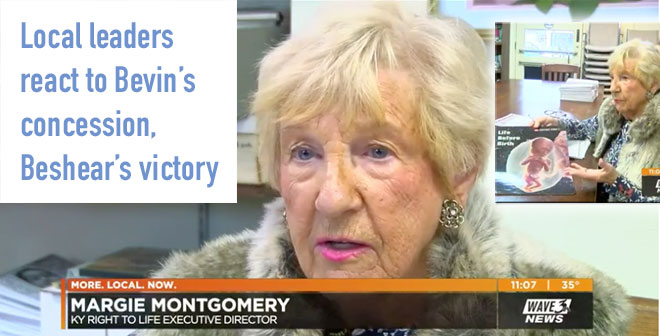 Kentucky Right to Life Association and its affiliated Political Action Committee (PAC) are non-partisan organizations. Our membership roster represents a diverse group of persons and families who are united for one purpose: to restore legal protection to innocent human life threatened by abortion, embryonic stem cell research, and euthanasia.

In our legislative efforts Kentucky Right to Life works hard with both sides of the aisle to represent unborn children and their mothers. Since its founding, in each election cycle the KRLA-PAC has been pleased to endorse both Republicans and Democrats alike.

We understand that the restoration of full legal protection to unborn children will occur when, and only when, both major political parties embrace an ethic of life from conception until natural death.

As the largest state-wide pro-life organization that speaks for those whose voices are denied, we can’t ignore the harsh reality that sustained efforts to persuade the Democratic party away from its philosophy of “choice” have failed miserably.

The 2012 Democratic National Convention taught us that the political party that used to advocate for the little guy has mostly been taken over by radical, pro-abortion leaders. On March 20th, Democratic House leaders, working with Rep. Tom Burch (D) and his stacked pro-abortion H&W Committee, killed every pro-life bill introduced into the legislature. As of this writing, the Obama administration is using the full power of its legal resources to force owners of Hobby Lobby and the Little Sisters of the Poor to fund the killing of innocent human life with abortifacient chemicals and devices.

Some contend the Kentucky Democrat Party is different. Regrettably, on the life issues, that’s not been the case.

For the 8th straight year, each and every incremental, common ground pro-life bill has been killed by the Democratic-controlled House. Little has changed in leadership over the years to offer pro-life Kentuckians any hope. House Democrats continue to elect pro-abortion leadership.

The few praiseworthy exceptions prove the rule: Democrats, for whatever reason, are not reliable defenders of un-born children threatened by abortion.

This legislative session provides an objective case in point: the motion on the ultra-sound informed consent bill SB 8 to suspend the rules in an effort to move it from Rep. Tom Burch’s pro-abortion H&W committee onto the House floor for action, received only 2 Democrat “yea” votes. There are 54 House Democrats. Do the math.

In politics it is important to watch what public servants do, not so much what they say.

Moving into the November elections, politicians will ad-vance excuses why they didn’t vote on SB 8. Some will dismiss the action as a mere procedural vote. Others will claim they were supporting other pro-life bills. But don’t be deceived: the move to suspend the rules for action on SB 8 was an opportunity to take a firm stand for women and their unborn children. Those who were present but abstained from voting “yea” chose to side with House Democratic leadership and abortion providers rather than those threatened by abortion.

At 10:17 a.m. on March 14th, the House roll call con-firmed 93 members were pre-sent while 7 members were absent. Those absent were: Reps. Couch, Denham, Dos-sett, Gooch, Nelson, Riner, and Waide. At approximately 11:15 a.m. Reps. Joe Fischer (R ) and Tim Moore (R ) moved to suspend the rules to pull SB 8 from the recalcitrant H&W committee for action on the House floor. By 11:27 a.m. the vote had been registered (see photo). Two Reps. “changed” their votes: Rep. Kenny Imes (R ) had left the House floor and was almost to his car when he received a cell phone call from a fellow pro-life legislator ask-ing him to return to vote ‘yea’, which he did. Rep. Tommy Thompson (D, dist. 14) who had abstained from voting until after the votes were registered, changed his vote when it would make no difference to the outcome.

Two Kentucky Right to Life legislative agents were present in the House gallery for the vote and know who was on the floor during the vote.

2014 may well be an historic election year in Kentucky. For those who understand that the protection of innocent human lives and their mothers is of paramount importance and requires extraordinary efforts, the record is clear: many who claim to be pro-life are not pro-life when the choice is between unborn children and House leadership. November is coming. Let us all stand with unborn children threatened by abortion and vote accordingly.

Let’s remember the dark days and work hard to retain the Republican majority for pro-life action.