Please read the blog article for details and updates.

Following a three day hearing in September 2017, U.S. District Judge Greg Stivers sided with the EMW Women’s Surgical Center and Planned Parenthood to strike down a Kentucky law requiring abortion clinics to have a transfer agreement with a local hospital in case of an emergency.

Elizabeth Kuhn, a spokeswoman for Gov. Matt Bevin said the administration “plans to appeal to the 6th U.S. Circuit Court of Appeals,” The Kentucky Courier-Journal reported. “We are disappointed that the court would strike down a statute that protects the health and well-being of Kentucky women,” Kuhn said in an email.

Similar laws have been upheld in Louisiana and Ohio, increasing the likelihood that the Supreme Court may become involved.

The nub of the lawsuit is that the transfer agreement is both unnecessary and a ruse to block access to abortion—“They’re about shutting down abortion facilities,” said Brigitte Amiri, an ACLU attorney for EMW. Amiri insisted there were no problems until Matt Bevin became governor.”

UPDATE: The Appeal was heard by the Sixth Circuit Court in Cincinnati on August 8, 2019. Also see post on blog.

On February 6 a news release from the Office of Governor Bevin reported that the appeal is now going forward. Below is the text of the release:

At issue is the constitutionality of a 1998 state law requiring abortion clinics to maintain transfer agreements with local acute care hospitals and transportation agreements with ambulance services, as safeguards in the event of medical complications. The Bevin Administration is appealing a previous U.S. District Court ruling in favor of EMW Women's Surgical Center and Planned Parenthood of Indiana and Kentucky, Inc., which declared these commonsense safety measures to be an undue burden on the right to an abortion.

"The [transfer agreement] statute and regulation do not constitute an undue burden on the right to an abortion," notes the brief by Gov. Bevin's legal team. "The Commonwealth has a valid interest in protecting the health and safety of abortion patients."

"The record shows that transfer and transportation agreements benefit patients. The only emergency medicine physician to testify in this case testified at length about the benefits of transfer agreements, and even the National Abortion Federation recommends that abortion facilities have such agreements. If the Commonwealth cannot enact such beneficial requirements, then it is not clear what it can do to protect the health and safety of abortion patients."

Over the past three years, Gov. Bevin has worked with the General Assembly to enact several vital pieces of pro-life legislation, including:

In addition to the transfer agreement case, Gov. Bevin's legal team is also defending the Commonwealth against court challenges to the ultrasound law (HB 2) and the live dismemberment abortion ban (HB 454).

UPDATE: Though the TA Appeal is pending, Gov. Beshear is reported to have issued a license to Planned Parenthood to begin perform abortions in Louisville the week of March 1. Read more.


The video is one of many on YouTube that report medical emergencies in abortion clinics and the need for swift response in a hospital setting that the transfer agreement is designed to facilitate. 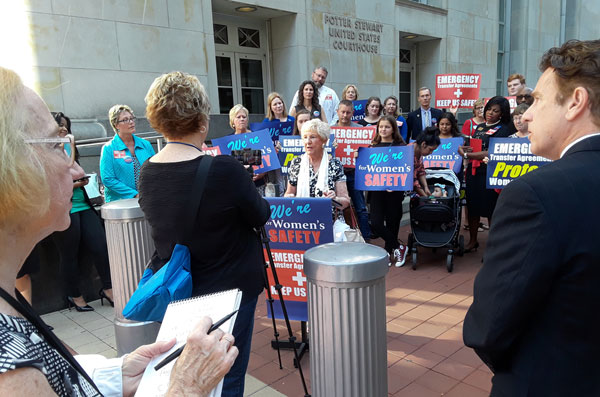 Margie addresses the media at a conference following the Appeal on August 8. Deborah Yetter, a reporter with the C-J, is in the foreground on the left. Schu Montgomery, Board member of Louisville RTL, is at right.